By Lauren Roberts and Chelsea Heaney

Ambulance call-outs in some Australian cities have dropped by as much as 25 per cent since the introduction of COVID-19 restrictions, while some services say they are getting more calls about flu-like symptoms which should be going elsewhere.

With more Australians at home and hunkered down as the pandemic continues, paramedic services say they have seen changes to their work on the front lines.

How are paramedics near you coping in COVID-19 Australia?

ACT Ambulance Service chief officer Howard Wren said there had been a 25 per cent decrease in call-outs in his jurisdiction over the last four weeks.

“People are not out and about so much, they are taking things very easy.

“It’s quite a noticeable decrease.”

Mr Wren said some officers had voiced concerns that patients weren’t calling in because they were afraid to go to hospital, but he said that did not appear to be the case.

“We were a little concerned that people were waiting at home and were getting sicker, but we haven’t seen any evidence of that,” he said.

A spokeswoman for New South Wales Ambulance said while there had not been a drop in the number of triple-0 emergency calls received, there had been a “marked increase in the proportion of those calls which could be managed by other means”.

She urged people worried about cold and flu-like symptoms in NSW to call ahead to their GP or hospital or to visit a COVID-19 clinic, rather than dialing triple-0.

The spokeswoman also said NSW Ambulance had systems in place to maintain supplies of personal protective equipment and other essentials when responding to a patient with suspected or confirmed COVID-19.

“As part of this, NSW Ambulance has received a substantial budget increase to fund additional emergency activity. NSW Ambulance will also receive funding for any extra equipment and PPE required to respond.”

“A lot of this has to do with people doing the right thing at the moment, they’re isolating at home and taking things very easy,” he said.

“When that happens, there’s less traffic on the roads so less motor vehicle accidents.

“People aren’t out doing the things they normally do, which obviously tend to lead to people being injured.”

But Mr Thomas said despite the dip in case numbers, the service was continuing with recruitment of additional paramedics, interns and emergency medical dispatch officers to be prepared for extra pressures in the case of any community transmission in the NT.

And he said the pandemic was also having an impact on the work required of paramedics when they were called to a job.

“Case times have extended as paramedics have been required to wear additional PPE, increase patient consultations to ensure they are aware of COVID-19 risks and clean and wash down vehicles after each case,” he said. 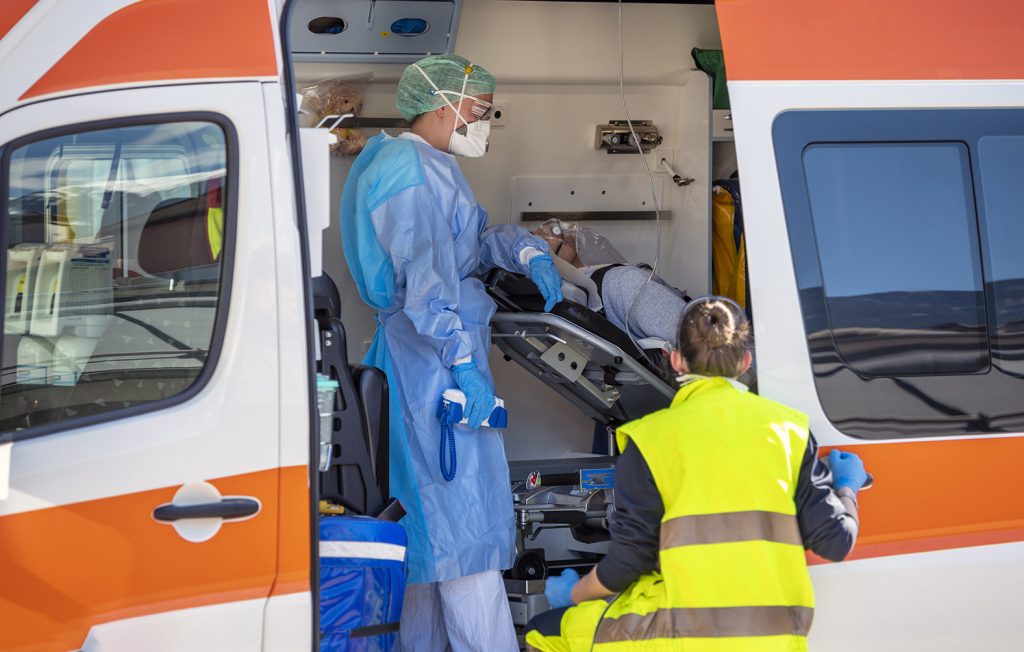 A Queensland Ambulance Services media spokeswoman said the service was currently dealing with “a very manageable workload”, but was unable to provide figures about how the COVID-19 period compared with previous months.

The spokeswoman said in the last financial year, the service had seen an increase in call-outs but the number of triple-0 calls received since COVID-19 isolation restrictions were introduced was “manageable”.

South Australia Ambulance Service said it had seen a 10 per cent drop in the average number of emergency call-outs compared to the same time last year.

“We would typically see an increase in regional demand over the Easter period, with families heading intrastate on holidays. This year, this hasn’t been the case,” a spokesman said.

“It’s pleasing to see that South Australians are doing their part by following social distancing advice.”

An Ambulance Tasmania spokesman said the service had experienced a 50 per cent decrease in the average calls per day for road accidents since the beginning of the year.

“Since January, the nature of triple-0 calls to Ambulance Tasmania has reflected the COVID-19 social distancing and stay at home messages, which we are very grateful for,” he said.

“Meanwhile, our responders are taking extra precautions to protect themselves and their patients from coronavirus at every case they attend.”

Ambulance Victoria said their service is seeing a “slight reduction in workload”, which they said could reflect the fact that people are doing the right thing and staying home.

“We continue to urge people with serious health conditions, or if it’s an emergency, to call triple-0,” a spokeswoman said.

The spokeswoman said staff were taking extra precautions with protective equipment and the cleaning of vehicles.

“Paramedics are wearing gloves, masks and protective eyewear to every case they attend. Suspected or potential COVID-19 cases require this level of protection, plus a splash-proof gown or overalls.

“Our paramedics have all the necessary cleaning products and supplies they need and they are following very prescriptive decontamination procedures which ensure ambulances are clean and safe.”

Paramedics in Western Australia have seen fewer incidents on the roads and in the workplace based on statistics from this time last year, but St John Ambulance WA CEO Michelle Fyfe said they were receiving more call–outs from patients with respiratory illnesses and flu-like symptoms.

“As you might expect, we are seeing a reasonable number of domestic trauma incidents or accidents around the home,” she said.

“We want the community to know that if it’s an emergency, call triple-0.”

Ms Fyfe said the organisation had increased the telemedicine and video consult services at its Urgent Care and General Practice medical centres in WA, which deal with non-emergency medical issues.